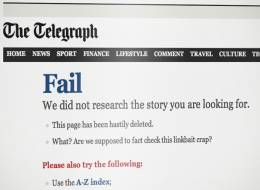 Today The Telegraph reported that a (non-existent) ‘Councillor thought cloud computing depended on rainy weather‘ (). A quick Google search reveals a forum post on this same ‘story’ from 2009, and blog post from four days ago. Both of these places found the story and quickly identified it to be a hoax. Neither of these places are a national news source.

Making this kind of mistake is embarrassing, but I find it unconscionable that any organisation that even pretends to have any journalistic integrity considers it acceptable practice to simply remove stories from their website, with no retraction, as though the mistake never happened.

I’ve republished the text of the Telegraph article below. If anyone can find out who wrote the story (either the original or the Telegraph version), I’d love to hear from you.

Galway councillor Seamus Tiernan was branded a ‘feckin eejit’ for thinking that cloud computing would only work in areas with lots of rain.

In reply Coun Tiernan told incredulous Cllr Martin Shiels that he should “go **** himself”.

The row broke out after Mr Tiernan told the Infrastructure Committee meeting this week that his native Connemara would be ideal for cloud computing because it has heavy cloud cover for nine months of the year.”

The Independent councillor said that the Government should be doing more to harness clean industries for the Connemara area and he named wind energy and cloud computing as two obvious examples.

“Connemara in particular could become a centre of excellence for wind energy harnessing, as it is open to the Atlantic,” he said.

“Also in terms of cloud computing, we have dense thick fog for nine months of the year, because of the mountain heights and the ability to harness this cloud power, there is tremendous scope for cloud computing to become a major employer in this region.”

However his mistake was pointed out by a Coun Shiels who said: “This is taking the biscuit. I’ve heard it all now. You must be a fecking eejit to think that the cloud computing had anything to do with climate.”

Coun Tiernan took umbrage at the remarks of his colleague and called for them to be withdrawn. When Coun Shields refused to do so, Tiernan said “go **** yourself, Councillor Shields.”

Chairman Sile Ni Baoill asked for both councillors to withdraw their comments, but Coun Tiernan was repentant that Coun Shields was wrong and that cloud computing is linked to cloud cover.

“Tell me why large companies are opening server farms in cold wet countries then,” he asked Cllr Shields.