This year as a part of the Brighton Digital Festival I was pestered encouraged to participate in the Geo-writing project.

Geo-Writing invited you to grab writing prompts based on your location, wherever you were in the world! Centred around Brighton – where there were a higher intensity of prompts – but then rippling outwards, the prompts based on your location could be worked on straight away or emailed to yourself to work on at leisure. Authors used these prompts to write a fragment of a story, and submit to become part of a multi-authored ill-fitting story patchwork created during the Brighton Digital Festival. Sometimes, the same prompt was twisted through various viewpoints, other times characters and motifs featured in more than one tale.

My entry is written in the style of an Argus story and inspired by a prompt I found near West Pier: “A speedboat named Calamity crunches out on the pebbles.” The story also works as a loose prequel to these six Geo-writing stories by Clarissa about a Kemptown overrun by zombies known as ‘Blighters’.

TWO MEN have been taken to hospital after their speedboat ran ashore on the beach in front of the West Pier.

Emergency services were called to the scene shortly after 5am by Brenda Cobb, 48, who witnessed the incident. Mrs Cobb said that the boat appeared to be out of control as it ran onto the shore at high speed.

“When I went down to help I thought they were both dead at first. They weren’t moving and looked like they’d been out there a while” said Mrs Cobb. “So I called an ambulance. I didn’t think I could possibly help them.”

While it is unknown what caused the accident, it is possible that the occupants were in difficulty before they ran ashore. Mrs Cobb said that they looked unwell, but wasn’t sure if they were sick or simply injured and confused.

She said: “One of the blighters bit me! While I was on the phone I heard one of them moving about so I went over to to tell him that help was on the way. He just looked at me funny for a moment, then suddenly lunged forward and bit me on the arm. He broke the skin, but it’s fine. It gave me quite a shock though.”

The men have not yet been identified. The Argus has discovered that their vessel, an Oceanmaster 660 named ‘Calamity’, is not currently on the UK Ship Register.

Both men were taken to the Royal Sussex County Hospital.

More as we know it. 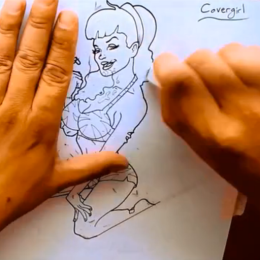 I’ve backed seven Kickstarter projects at this point, and have been really happy with the experience. I keep an eye on the campaigns running out of Cardiff, but until now I haven’t found anything that I wanted to back.

So, if you like poker, pin-up girls and zombies — and you want to support some local artists — then you should back Zom-B-Girls too!

We believe many will love a unique deck incorporating humour, playful sexiness and of course that current staple of pop culture, the ever lovin’ Zombie! Just because humanity has perished from this alternate post apocalyptic zombie world doesn’t mean they have to miss out on cute girls when they play cards! And neither should you. 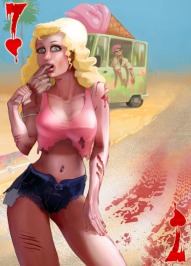 There’s another 7 days to go, and at this time the creators have raised almost half of their £4,500 goal. They’ve added a bunch more tiers too, so now you can get multiple decks, a calendar and desktop wallpapers. You only need to pledge £5 to get a deck (if the campaign meets its goal) but if you pledge in the higher tiers you can actually appear in the deck as either a zombie or a survivor!

UPDATE 2013.09.04: With 36 hours to go this project was stalled at <50% funded, and has just been cancelled. I just received a backer update from Timothy Thomas saying that he has lost contact with artist Robert Elsmore who has moved to Canada. He promises that there will be a second campaign in the future with new artists.

Zombie Apocalypse Now In A Minute is a Cardiff-set webcomic documenting the rise of the undead in Wales. Inspired by Shaun of the Dead and the feel of a post-match Cardiff, the story follows the adventures of Keith, an overweight, sarcastic bartender who attempts to hide out in the castle.

The webcomic is the work of Jamie McGowan who himself runs a bar in Cardiff, which has no doubt provided him with plenty of inspiration. The artwork is stylish and imaginative, and captures Cardiff perfectly.

END_OF_DOCUMENT_TOKEN_TO_BE_REPLACED

Take a walk with a zombie and a beautiful day!

But try to imagine your self waking up from the dead… How would you feel?

The Clown by Patrick Bovin END_OF_DOCUMENT_TOKEN_TO_BE_REPLACED

Anyone can upload. Few can direct.

In today’s snack culture, there’s no shortage of home videos circulating online, garnering millions of views worldwide. To demonstrate the difference in quality between a short film and a video, we had three directors turn the popular viral video “Charlie Bit My Finger” into a short film. We ended up with three very different cinematic interpretations, but they all share one thing in common: a great director makes all the difference. Come see the world’s best short films at the Worldwide Short Film Festival.

The end of days are upon us. Zombies now walk the earth 24/7. The ultimate weapon must be crafted so that Niko and Sam can escape on the last remaining minecart out of the infected city!