Most infographics on the web consist of generic graphics backed up with (lots of) poorly researched text.

When done well these informational graphics use charts, diagrams and illustrations to make complex ideas easier to comprehend. At their best the results can be quite illuminating.

Randall Munroe has produced more than a few great infographics for xkcd. His infographics can be broken down into three rough categories:

For this post I’ve compiled the more informative types. There’s a list of some (but not all) of xkcd’s novelty graphs and charts at the end of this post.

This first xkcd diagram maps out the IPv4 address space of 2006, with no jokey notes whatsoever. 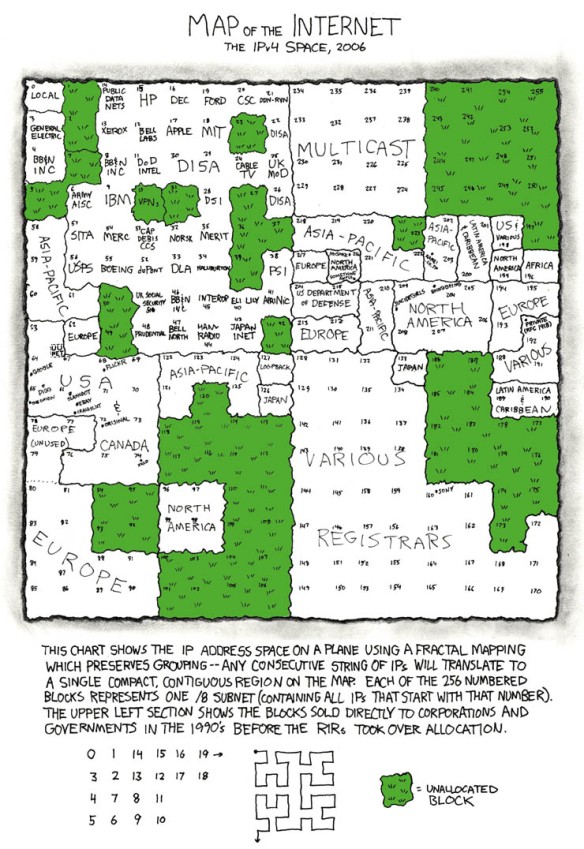 The second fully-fledged xkcd diagram is a much more amusing look at the electromagnetic spectrum, real and imagined. This is one of my favourites.

Accurate on a log-scale, these diagrams depict items from a human scale to the limits of our perceptions. The results are reminiscent of the famous Charles and Ray Eames film Powers of Ten.

The interactions of characters in The Lord of the Rings films, the original Star Wars trilogy and others.

Here’s a detail from the beginning of The Empire Strikes Back: 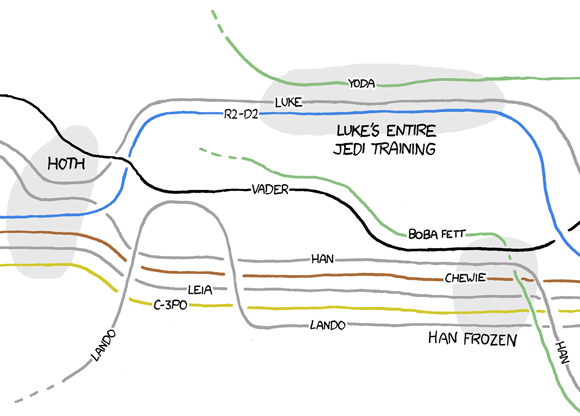 To enter space from Earth you have to ‘climb’ its gravity well. The more massive the planet (or star) the deeper the gravity well. Other solar bodies (like small moons and asteroids) have wells so shallow you could literally leap from them into space. 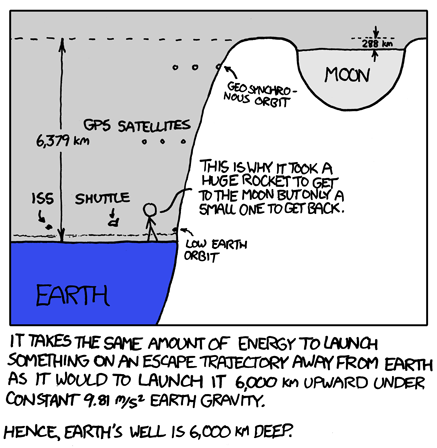 Based on a survey of 222,500 users who named over 5 million colours, this graphic was published on the xkcd blog (or ‘blag’), along with some other interesting diagrams. 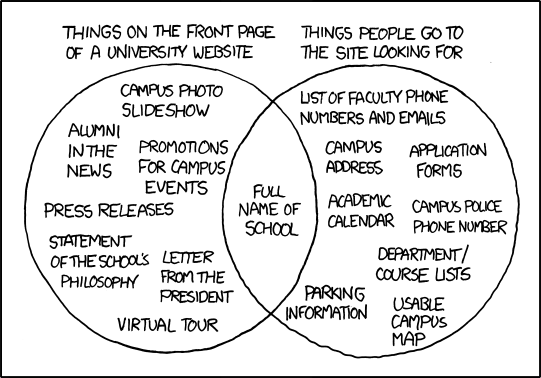 This is just a detail. View the full version on xkcd.

Or Noughts and Crosses to UK readers. I’m just including the half that shows all the moves for ‘O’ here: 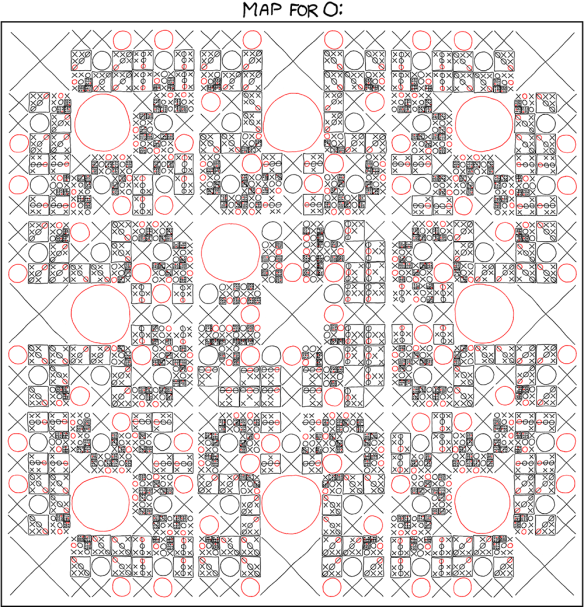 This chart appeared on the xkcd blog (and was later updated) to provide context in the days when the Fukushima disaster was unfolding.

(I wonder if this chart provided the inspiration for the similar and famous money chart that came later in the year?)

Polar graph of what stuff happens on which days, based on number of Google results for phrases like “Company meeting on <day>” 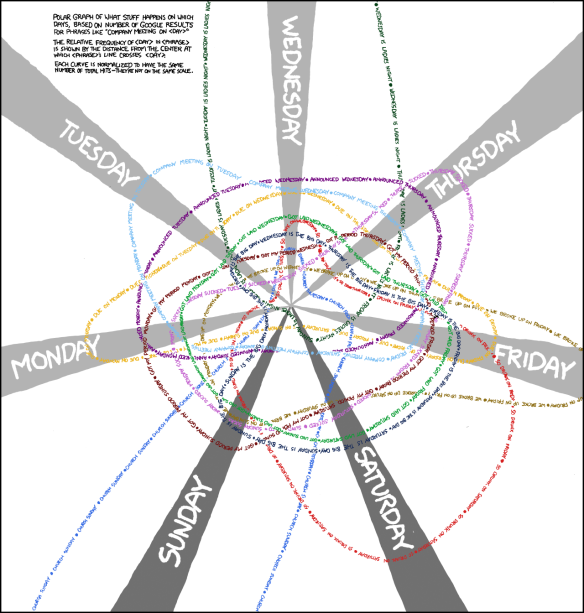 This is almost certainly the most important and profound infographic Randall has produced for xkcd.

It’s impossible to comprehend the huge numbers that are casually reported in the news every day. Like a child for whom everyone over 20 is ‘really old’, we have trouble understanding the differences between millions, billions and trillions. This impressive megachart helps to bring some perspective.

There’s a huge zoomable version of this chart for you to explore. Every little section is a noteworthy infographic in its own right, from the dollars…

…to the billions of dollars…

…and the trillions of dollars.

Every year, American culture embarks on a massive project to carefully recreate the Christmases of Baby Boomers’ childhoods.

A to-scale comparison of the depths of great lakes and oceans. 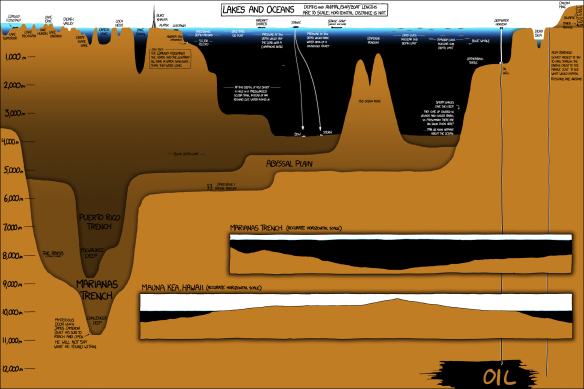 New extrasolar planets are being discovered all the time. The current count as of this blog post (January 2013) is 859.

What the shape of each of the US states reminds Randall Munroe of.

Vision related facts, arranged so that they all fit inside your field of vision. 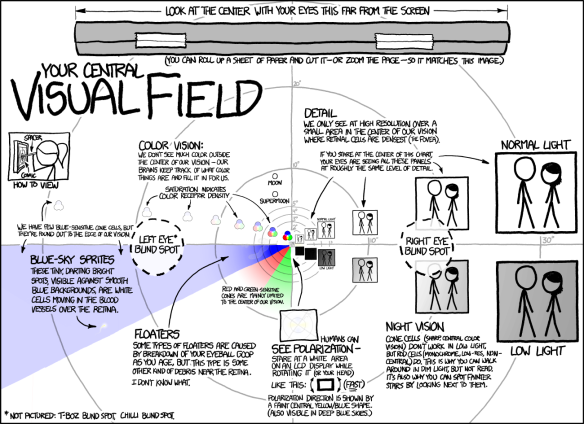 A look at the ebb and flow of the partisan and ideological makeup of the US Congress.

I’ll be honest: I haven’t studied this one sufficiently to confidently claim that I properly understand it. Try the Explain xkcd wiki for guidance.

A diagram of a Saturn V rocket, labelled using only the 1,000 most commonly used words in the English language.

This diagram inspired the creation of an Up-Goer Five text editor and the #upgoerfive trend on Twitter. I wrote about this recently on this blog.

Each date’s size represents how often it is referred to by name in English-language books since 2000, according to the Google Ngram Viewer. 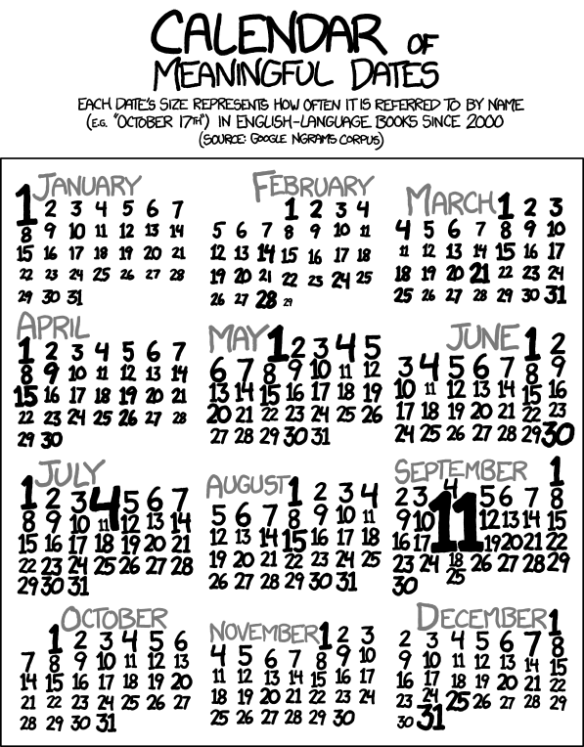 Unsurprisingly September 11th looms large, but interestingly the 11th on every other month is a particularly uneventful date. Perhaps we subconsciously avoid it because of the strong negative association.

More charts and diagrams I didn’t want to omit, but which are more subjective and gag-oriented. By date:

Elsewhere on this blog

Randall Munroe releases all of his xkcd images under a Creative Commons licence (CC-BY-NC to be exact) and I’m using them here in that spirit.

4 thoughts on “The infographics of xkcd”