Social Times yesterday posted an infographic (sponsored by AssistedLivingToday – slogan: ‘Information you can trust’). They introduce it by highlighting the most interesting statistic, which will be the focus of this blog post.

According to a fascinating infographic entitled “How Social Media is Ruining Our Minds,” over the course of the last ten years the average attention span has dropped from 12 minutes to a staggeringly short 5 seconds. As a person deeply ensconced in this connected age my experience shows this to be true. These days, we give a YouTube video just a few seconds to determine if it’s worth it. So what else does social media and technology affect within our minds?

This is the relevant section of the infographic: 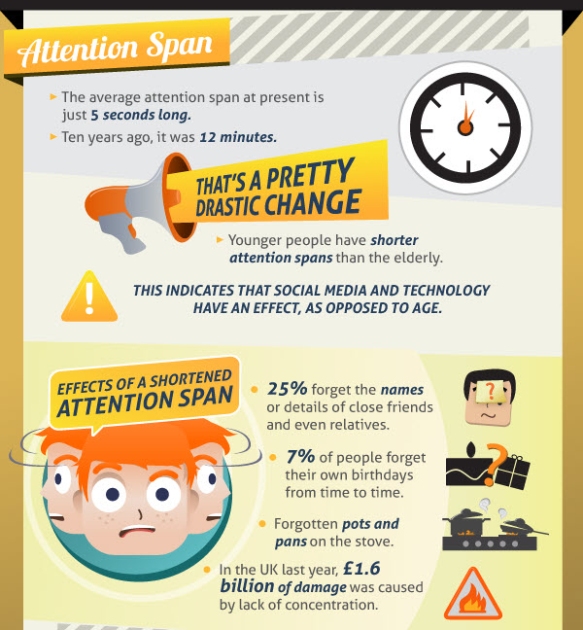 Shocking yes? Perhaps a little too shocking to be true?

The claim seems to have originated from a Telegraph story from 2008, with the headline ‘Stress of modern life cuts attention spans to five minutes‘. Perhaps you have already seen the clue I’m driving at, but I’ll quote from the article anyway:

The study by Lloyds TSB insurance showed that the average attention span had fallen to just 5 minutes, down from 12 minutes 10 years ago.

Indeed, it seems our attention spans have not shrunk to 5 seconds, but 5 minutes. That’s still a pretty drastic drop though, I wonder how they worked it out?

Naturally enough, as a news source The Telegraph are above linking to actual sources, but a quick Google brings up the relevant Lloyds TSB Insurance study from 2008: ‘Five-minute-memory’ costs Brits £1.6 billion (27th November 2008).

A new behavioural study, commissioned by Lloyds TSB Insurance, reveals that the average attention span is now just five minutes and seven seconds, compared to more than 12 minutes a decade ago.

The study put 1,000 people through a series of tests to judge their awareness and ability to recall everyday events. The over-50s outperform younger groups, suggesting that impaired attention is not age-related but caused by external factors such as lifestyle and workload.

The report goes on to highlight in great detail how this attention deficit results in more household accidents resulting in £1.6 billion worth of damage. Better buy some insurance quick!

They do describe the methodology in a little detail:

That seems a bit vague and unscientific to me, but without knowing the details of the study it’s hard to know. Still, a blog post written in response to the Telegraph story at the time pointed out that it was less of a study (the language used in by Lloyds TSB Insurance PR) and more of a survey:

[…] It’s based on a survey of 1,000 people i.e. they asked people how long their attention span was and whether they felt they were prone to accidents. No doubt the questions were chosen in such a way that they got the answers they wanted. Who are “they”? – Lloyds TSB insurance, or rather, their PR department, who decided that they would pay Mr David Moxon MSc. to get them the results they wanted. He obliged, because that’s what he does. Then the PR people wrote up Moxon’s “results” as a press release and sent it out to all the newspapers, where stressed-out, over-worked journalists (there’s a grain of truth to every story!) leapt at the chance to fill some precious column inches with no thinking required. Lloyds get their name in the newspapers, their PR company gets cash, and Moxon gets cash and his name in the papers so he gets more clients in the future. Sorted!

Can we please stop with the crap infographics now?

3 thoughts on “Infographic creators have a 5 second attention span”