Watch this in fullscreen!

View from the ISS at Night

A time-lapse made from photographs taken from aboard the ISS. Could use a little stabilisation in some shots, but still — pretty incredible.

On August 6, 2012 the Curiosity rover will attempt a completely automated landing in Gale Crater on Mars. Curiosity is about five times larger than Spirit or Opportunity, so it can’t just deploy a huge beach-ball and bounce to safety — instead it needs to pull off a much more precise (and dramatic!) landing.

Challenges of Getting to Mars: Curiosity’s Seven Minutes of Terror

Team members at NASA’s Jet Propulsion Laboratory share the challenges of the Curiosity Mars rover’s final minutes to landing on the surface of Mars.

That video is all the more impressive when you have a mental image of exactly how large the Mars Science Laboratory is: 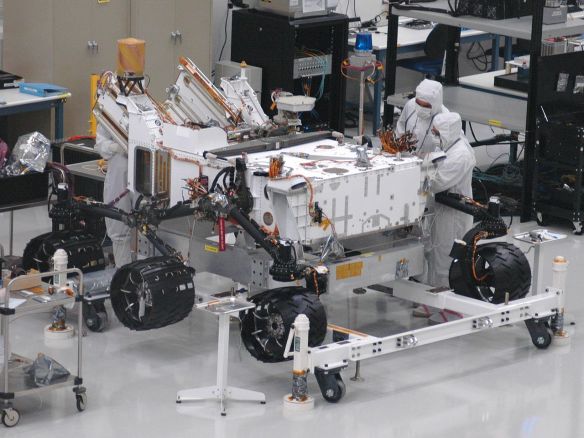 END_OF_DOCUMENT_TOKEN_TO_BE_REPLACED

ISS Star Trails, a set on Flickr from NASA_JSC_Photo

Expedition 31 Flight Engineer Don Pettit relayed some information about photographic techniques used to achieve the images: “My star trail images are made by taking a time exposure of about 10 to 15 minutes. However, with modern digital cameras, 30 seconds is about the longest exposure possible, due to electronic detector noise effectively snowing out the image. To achieve the longer exposures I do what many amateur astronomers do. I take multiple 30-second exposures, then ‘stack’ them using imaging software, thus producing the longer exposure.”

END_OF_DOCUMENT_TOKEN_TO_BE_REPLACED

There’s some lovely, crisp imagery in this short NASA documentary.

END_OF_DOCUMENT_TOKEN_TO_BE_REPLACED

“In the 1960’s NASA spent many years and millions of taxpayer dollars developing a special ‘space pen’ that uses nitrogen-pressurized ink cartridges to work in zero gravity, in a vacuum and at extreme temperatures ranging from -50 F to +400 F.

“The Russians used a pencil.”

This story keeps cropping up as an example of bureaucratic waste, or specifically as an example of what a colossal waste of money the space programme has been. It has been circulating the internet as fact since the mid ’90s, and even fictional White House Chief of Staff Leo McGarry made the claim in a 2002 episode of the West Wing.

This Million Dollar Space Pen story is a pure fabrication however. The space pen was developed not by NASA, but by businessman Paul C. Fisher. It was only adopted by NASA after years of testing and the costs of developing the pen were never passed on to the US government. Furthermore, detritus from wooden pencils presented a potential hazard in microgravity, and Soviet Union would later adopt the Fisher space pen also. END_OF_DOCUMENT_TOKEN_TO_BE_REPLACED

A bit of wonder for this #ScienceSunday.

Sander van den Berg downloaded raw image sequences from NASA’s Cassini and Voyager missions and set them in motion and put them to music. The results are worth watching in fullscreen.

Most of these shots are of Saturn’s rings, but Jupiter makes an appearance too.

(via @Space_Jockey / Banner image from APOD)