Perhaps it’s no surprise to learn that David Thorne, the guy who has a website documenting hilarious email exchanges, in which he exposes the (alleged) stupidity and ignorance of certain people he encounters, is a bit of a jerk. The first example I was aware of that went viral was the brilliant 7 legged spider drawing:

I do not have any money so am sending you this drawing I did of a spider instead. I value the drawing at $233.95 so trust that this settles the matter.

His next victim was supposedly was asking for a free pie chart. This one I remember looking into at the time. Simon Edhouse is a real business man, who was complaining on Twitter that the post on 27b/6 was a mix of elaboration and outright fiction. Only the two of them know the exact mix of truth and reality, but Edhouse has felt the need to add this paragraph to the about page on his website:

Contrary to a lot of generous, (if fanciful) publicity received in November 2009, Virtusoft is not developing a fee-based Twitter clone. One of the key aspects that underpin the company’s projects is the notion of giving as much power to users as possible. This strategic pathway requires that all the projects Virtusoft is developing would be ‘free’ for end-users.

Similarly, the next exchange was with a woman who wanted a free poster to help find her missing cat. This was also a huge internet hit, but it soured me even more on Thorne. The posters he made are brilliant though.

The Internet is a Game

In 2009, Thorne came out with a book of his email exchanges. When some Reddit users failed to receive theirs, they complained publically.

Here is a tl;dr summary of what happened next, on Reddit:

Guy who makes up sometimes funny email exchanges with clients and neighbours produced a book which was bought by some redditors but never got delivered.

After allegedly trying to contact the author to see where the books were, they got nowhere and so posted here about it.

The authors friend began publishing redittors private addresses here in the public reddit and said that they wouldn’t delete the info unless the redditor deleted the complaint posts.

Author then deletes his comments but they are preserved here.

I guess there’s no real surprise here, but there’s probably a lesson about rewarding people who behave like jerks. And another lesson about not taking things on face value.

Thorne has written an apology explanation for what went wrong. This much at least is certain:

While I appreciate that there are some people upset by these minor delivery issues, I can assure you that the plan was not to steal 116 peoples money and live like a king.

On the subject of publishing their customers information in a public forum:

This was the case with the two individuals sobbing on Reddit. Both of those people have had their orders processed. When they stated otherwise, a staff member posted evidence to the contrary – perhaps not the best course of action but amusing nonetheless. 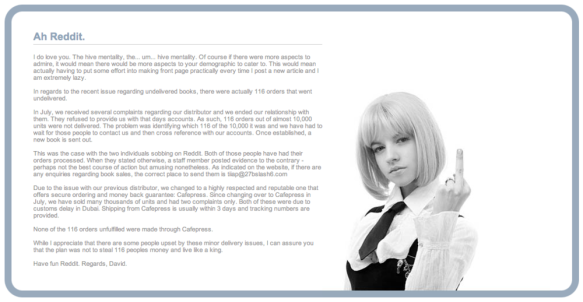 Anyway, the internet is always going to be full of jerks, and it’s not really my battle. I probably should have learned to ignore stories like this a long time ago…

Over the last few years, this post has gotten increasingly popular and attracts occasional comments.

The first comment from 2011 claimed to be from the Simon Edhouse mentioned in the post above. I kind of assumed it was him, but never knew for sure. Then in 2014 after this post had a spike in popularity it attracted another comment in the form of a personal attack against the ‘Simon Edhouse’ commenter. Just now there were a couple of comments throwing around all sorts of allegations about real identities, criminal activities and more.

I’ve decided to close the comments on the post and delete the ones I had previously approved. While I have no love for David Thorne, I also have no personal connection to him whatsoever, and I would prefer to keep it that way.