There’s something fascinating to me about obscure punctuation marks. I think it’s that I have great sympathy for smart people who attempt to solve problems that regular people don’t really care about.

Flavorwire recently posted a roundup of interesting real punctuation marks (an article that seems to have been cribbed from an older mental_floss post actually). Most of these are the creations of Hervé Bazin who proposed new exclamation and question mark variations to signify acclamation, certainty, doubt, love and others.

On the lighter side, College Humor has recently invented eight new punctuation marks (that it thinks) we desperately need. 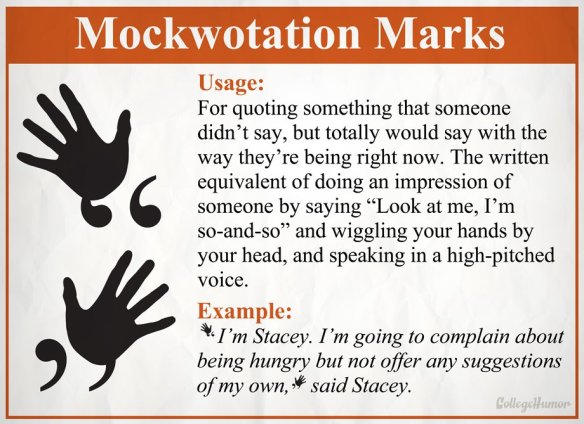 The mockwotation marks are my absolute favourites. I would do away with the actual quotation mark elements and just keep the wavy hands.

Similarly, I wonder if there could be a fun use for an air quotes / scare quotes punctuation mark? I would use them to distance myself from some awful turn of phrase by indicating that it’s not something I would usually say.

These were my other favourites:

The “I’m not angry” mark

I would probably attach this one permanently to my signature. (It’s not so much that I need to be brief, it’s that I highly value brevity.)

Sarcasm is pretty much my default state, so it would be nice to have a subtle way like this to express that I really mean what I say when it’s important. 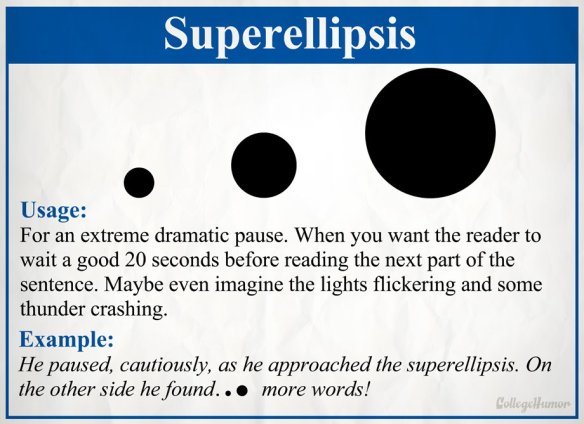 I could see this one being used in screenplays instead of beat.