Datamoshing is a form of glitch art which occurs when ‘the I-frames or key-frames of a temporally compressed video are removed, causing frames from different video sequences to bleed together‘.

HOW TO DATAMOSH (See also: PART 2: ENTER THE P-FRAME and PART 3: THE DATAMOSH ACTUALLY HAPPENS)

They guy behind these videos seems to have popularised the technique with a Chairlift music video for Evident Utensil, but Sony would rather you didn’t see it.

END_OF_DOCUMENT_TOKEN_TO_BE_REPLACED 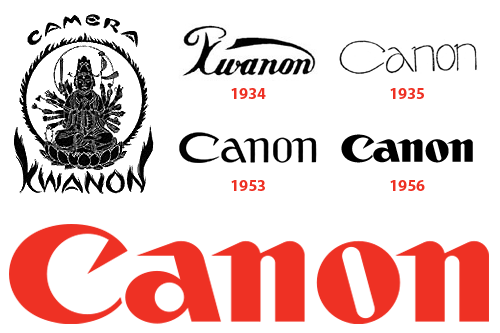 I thought this was interesting:

In 1933, when Precision Optical Instruments Laboratory was established, the name given to cameras manufactured on a trial basis at the time was Kwanon. This title reflected the benevolence of Kwanon, the Buddhist Goddess of Mercy, and embodied the Company’s vision of creating the best cameras in the world. The logo included the word with an image of “Kwanon with 1,000 Arms” and flames.

via Origin of the Logo – canon.com

Precision Optical Instruments Laboratory underwent several name changes before the adoption of Canon Camera Co., Inc., in 1947. This change was significant in that Canon brand and company names were unified for the first time in its history. Several versions of the logo were also used, until a unified version was created in 1953. After further refinements, the logo used today was perfected in 1955. It has remained unchanged for nearly half a century.

via Evolution of the Logo – canon.com