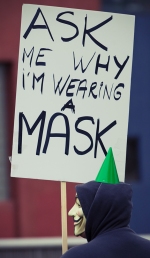 By the early sixteen-hundreds, the bonfires traditionally lit around the start of November had been co-opted as trappings for a sort of national anti-Catholic day at which effigies of the Pope would be incinerated.

As mastermind behind the terrorist outrage du jour, however, the plot’s nominal leader Guido Fawkes rapidly replaced the pontiff as hate-mascot of choice on these occasions.

Jump forward 300 years, though, to the battered post-war England of the 1950s, and the saturnine insurrectionary had taken on more ambiguous connotations.

When parents explained to their offspring about Guy Fawkes and his attempt to blow up Parliament, there always seemed to be an undertone of admiration in their voices, or at least there did in Northampton.

While that era’s children perhaps didn’t see Fawkes as a hero, they certainly didn’t see him as the villainous scapegoat he’d originally been intended as.

Viewpoint: V for Vendetta and the rise of Anonymous – bbc.co.uk/news