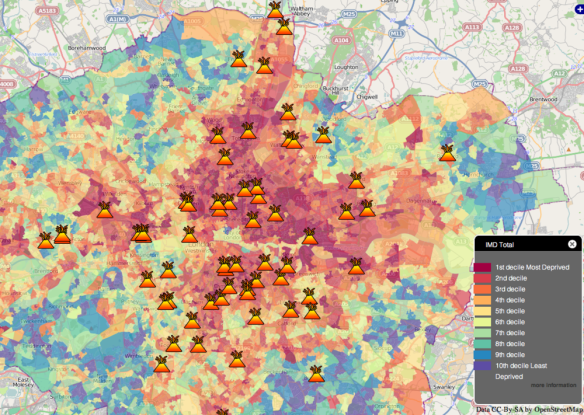 For law-abiding citizens setting fire to a bus or stealing from a shop is simply unthinkable. But academics say socio-economic factors cannot be left out of the equation.

Dr Paul Bagguley, a sociologist at the University of Leeds, says young men are usually engaged in confrontation with the police, while looters tend to include young children and women.

“It’s very likely that a lot of people stealing the stuff would not have done it before. There’s a sense in these situations that the normal rules don’t apply.”

He says while looting occurs in most riots, it has dominated this week and they could be called the “consumer society riots”.

“If you compare it to the riots in the 1980s, there’s a lot more stuff you can loot easily, such as portable electronic gadgets, mobile phones and flatscreen TVs.

“For a lot of looters, it’s just opportunity but it also expresses a sense of how else am I going to get a hold of these things?”

Prof Pitts says riots are complex events and cannot be explained away as “just thuggery”.

They have to be seen against the backdrop of “growing discontents” about youth unemployment, education opportunities and income disparities.

He says most of the rioters are from poor estates who have no “stake in conformity”, who have nothing to lose.

“They have no career to think about. They are not ‘us’. They live out there on the margins, enraged, disappointed, capable of doing some awful things.”

via UK riots: What turns people into looters? – bbc.co.uk

Months of conjecture will follow these riots. Already, the internet is teeming with racist vitriol and wild speculation. The truth is that very few people know why this is happening. They don’t know, because they were not watching these communities. Nobody has been watching Tottenham since the television cameras drifted away after the Broadwater Farm riots of 1985. Most of the people who will be writing, speaking and pontificating about the disorder this weekend have absolutely no idea what it is like to grow up in a community where there are no jobs, no space to live or move, and the police are on the streets stopping-and-searching you as you come home from school. The people who do will be waking up this week in the sure and certain knowledge that after decades of being ignored and marginalised and harassed by the police, after months of seeing any conceivable hope of a better future confiscated, they are finally on the news. In one NBC report, a young man in Tottenham was asked if rioting really achieved anything:

“Yes,” said the young man. “You wouldn’t be talking to me now if we didn’t riot, would you?”

“Two months ago we marched to Scotland Yard, more than 2,000 of us, all blacks, and it was peaceful and calm and you know what? Not a word in the press. Last night a bit of rioting and looting and look around you.”

via Panic on the streets of London. – pennyred.blogspot.com

Those who are calling for the army to be sent in have taken leave of their senses. Unless we really are going to solidify this failure, to carve it into stone, and exclude the angry ones from the citizenship altogether, to declare them to be something more than criminals: our enemies, the enemies of the state. I don’t want to live in a city in a state where that happens.