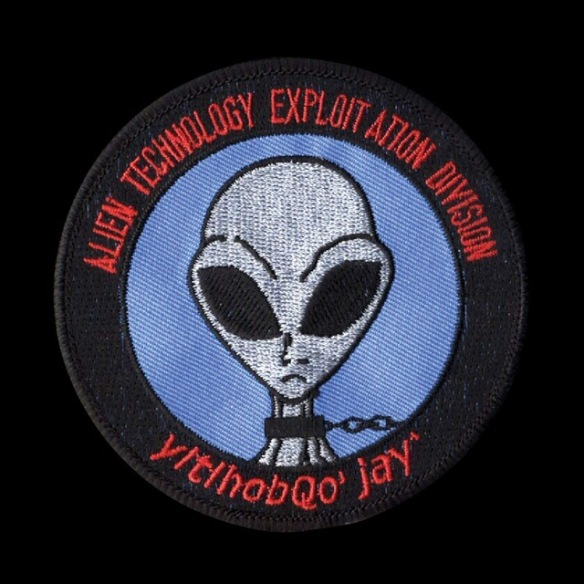 Confirmed: The Air Force Totally Hides Aliens From Us

You don’t know how many Freedom of Information Act requests we’ve filed in the hope of finding the Alien Technology Exploitation Division, the intrepid souls who’ll soon announce a sources-sought contract to develop the Hyperspace Blaster. Alas, they don’t exist.

A former officer at Air Force Space Command tells Paglen that he and his friends had the patches made at their own expense after getting endlessly ribbed for working in a secure vault “where they kept the alien bodies.” They wore them on their flight suits for months before a one-star general asked where he could get one of his own.

Oh, and the barely-decipherable legend on the bottom? It’s Klingon for “Don’t Ask.” Paglen got it in the mail from its creator after mentioning that he knew about its existence on the Colbert Report.

(via Secret Insignias From the ‘Black Ops’ World – wired.com)

This one’s clearly a joke, but the bigger joke is the reminder that there are certainly thousands of people working on things so secretive that no one will ever tell us that these things even happen, and they’re certainly not going to ask for our permission to continue doing these things. Vote for who you like, but some stuff is too important for democracy.