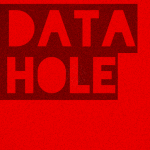 Datahole is a Twitter account I have been ‘maintaining’ for over four years. In practice I’ve simply been letting it run itself.

It takes RSS feeds from Ars Technica, Wired, The Guardian and Bruce Schneier‘s blog and looks for stories containing words like ‘leak’, ‘phishing’ and ‘password’.

Then it adds in unfiltered posts from The Register’s security news and The Open Rights Group.

Last night I updated the look and feel of the account with a new avatar, header and background image. Besides these cosmetic tweaks I added two feeds from the blog of security expert Brian Krebs, specifically his categories ‘latest warnings’ and ‘the coming storm’.

This trickery is all done with Yahoo Pipes which outputs a single RSS feed which I gave to Twitterfeed. Job done.

Originally Datahole was supposed to detect and tweet only news about masses of private data being lost. You know the kind of story: When someone from the NHS leaves a laptop full of patient information on a train, or when a social network gets hacked and tens of thousands of unencrypted passwords are leaked all over the internet.

In practice it was hard to narrow the focus that much, so it became a feed of general interest security news.