So begins an epic multi-part blog post containing the entire email conversation between Asher Vollmer the developer of an iOS puzzle game, and Greg Wohlwend, a designer he brings on board to add some serious good looks. The result is Puzzlejuice (now in the app store).

Amazingly for a working relationship that started and developed entirely over email (and the odd tweet), everything seemed to go very smoothly. I think the closest they come to an argument is this discussion about how big some elements should be:

I’m at a loss for the size of the blocks… I understand the importance of the margins for aesthetic reasons, but I’ve already gotten a lot of complaints from new users that the blocks are too small. It’s a serious concern I’ve been having about the game’s mass playability. The more we shrink the text, the menus, the blocks– the more we push away A) People with bad eyesight B) People with big fingers. You’ve probably noticed that the major difference between your mockups and what ends up in the game is that I keep making the text bigger. It’s because the iPhone’s screen is tiny!

PJ on the phone is already breaking a lot of rules because you’re not supposed to ask a user on a touch screen to be SO accurate at such a high speed. When a user places their finger on the screen, they tend to end up around 10-20px away from where they intended. (This is even worse when people play with their thumbs) In the menu system I cheat and make sure that they’re always touching a block, but mid-gameplay I can’t assume that they wanted to touch the “P” instead of the “E.”

Shrinking the gems 5px doesn’t seem like a lot but, for example, you’ll remember that there was a period when boggling felt awful on the phone for an indeterminable reason. It turns out that I had offset the user’s touch vertically by 12px. (Because the gem faces became 12px higher with the new art) and because of that small change the game suddenly felt unnatural and clunky and imprecise. This is a super honest from-the-bottom-of-my-heart reason that I’m very very hesitant to change the size of the gems: The game feels good. I’m finally getting complements on the iPad controls and the iPhone controls and this is only after months of working on this game. I really don’t want to spend another six months to re-tuning the controls =/

My final argument for keeping the grid its current size is this: The iPhone has margins built in. The black bits on the side of the phone border the game in a very natural feeling way to me. An iPhone screenshot seems cramped, but when it’s framed by the phone it feels fine to me.

I really trust your aesthetic intuition and I definitely want you having a direct hand in this. That hasn’t changed. I’m just always going to push for gameplay first and foremost. :)

ok cool. you make a good case and i can’t argue with it. 60px blocks it is! :) definitely no hard feelings or anything, i will work within the constraints to make it the best possible that it can be.

[…] i appreciate your fervor and pushing for function over form, and i feel the same way, i don’t have near as much knowledge about the pitfalls of the design and where we need to put all our chips, so yea, i will default to you. just know that i’m pushing for certain things in an effort to make the game look the best it can, but ultimately gameplay should be above all else. you’ll get no more friction from me if that’s on the line. :)

Hah awesome! I think this is exactly the relationship we should have– both arguing for the best possible game in two different ways

Soon after that exchange, they discuss the possibility of publishing their emails:

random idea. it might be cool to keep this 125 (and counting) email thread as our only form of contact. if we can somehow manage to keep contact to this very space, then we can like… publish this as a process thing. like this is the entirety of every communication that we’ve had, includes screenshots and so on. i could put it into some kind of form with attachments to make it more readable and nice etc. think about it. in the future-now people are reading this and being like, wow. i’m reading the email about the thing i’m reading about about the game i played earlier and he’s writing things about me reading this very thing. what makes me, me? what is consciousness? what is is? o_O—————-_____

I… I was thinking the exact same thing. XD

I just was holding off on asking in case you were concerned about privacy or something.

But we can just censor out what we want to censor out. Like we can censor out this part that I’m saying right now! Or maybe we don’t censor it so that it implicitly explains that we might have censored things.

I’m totally down for this idea but I would refrain from talking/thinking about it until we’re done because the question of what is when and who we’re writing for and why is making my brain explode and interfering with my ability to think about how to make the action of poking little colored cubes as satisfying as humanly possible.

Being that this is a conversation between a developer and a designer, there are plenty of mockups revealing how the look of the game evolved too. 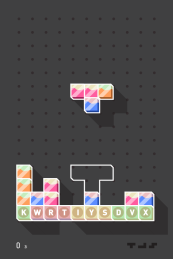 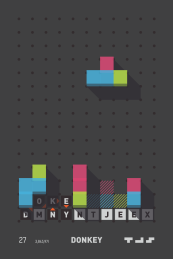 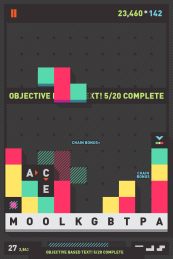 And here’s a good productivity tip:

Well the secret thing about the price is that we’ll lower it to 99c on Day 2 or 3 “temporarily.”

The main reasoning behind that price point is that there’s a huuuge gap in the customer base that will spend 99c and the customer base that will spend 1.99, but the gap is much smaller between 1.99 and 2.99. And the reason that we don’t just release at 99c is that the higher price point allows us to lower the price at all. And when we lower the price– bots+people pick up the sale and that’s basically free press for us.

It’s a super businessy reason, but apparently it’s worked pretty well for a couple of my friends.

It’s a fascinating (and very amusing) exchange to read through if you are thinking about making an app. And yes, I did read the whole thing!