[…] did you know the “All restaurants are Taco Bell” scene in Demolition Man was replaced with a horribly-dubbed version that said “Pizza Hut” for the European version?  Or that one of the biggest product placement whores of all time is Michael Bay?  Okay, that second one you probably already knew.

via A Brief History of Conspicuous Product Placement in Movies – filmdrunk.uproxx.com 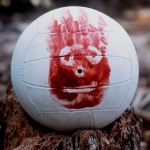 Product placement has a place in movies and television. I’d rather see Michael J. Fox slurping from a Pepsi than have the narrative broken for a few minutes for a commercial break.

Sadly you tend to get both. We’re going to be seeing much more placement in the future too, as advertisers want to be able to market to those who torrent or TiVo their television shows.

In some cases product placement actually helps a film. It can be jarring to see a character smoke Morley cigarettes or drink Heisler beer or fly Oceanic Airlines. I’m sure big brands don’t appreciate it, but their ubiquity actually makes them stand out less.

I was surprised to learn that The Island broke the (then) record for number of product placements, considering that it’s set in the future, and that for the first half of the film the characters are kept completely isolated from the real world. Consequently, these real brands actually shattered the illusion of the film, quite badly. They’ll date it quickly too.

Reviewers have also objected to the prominent use of product placement in the film, despite the fact that the characters themselves are products and the property of the Merrick Corporation, which the film clearly denounces. Cisco Systems, MSN Search, Calvin Klein, Xbox, Puma, Reebok, Miller Light, NBC, NFL, Budweiser, Michelob, Apple, Aquafina, General Motors, DaimlerChrysler, Mack, Coca-Cola, Speedo, TAG Heuer, Amtrak, Ben & Jerry’s, and Nokia are some of the sponsors of the film.[8] In an Entertainment Weekly cover story, Bay stated that the extensive product placement was the result of trying to offset production costs – “Bay called on friends at major corporations — outfits like Budweiser, General Motors, and Microsoft — and offered product placement in exchange for cash. ‘We made about $850,000 on that,’ he says. ‘And we needed that money to get this movie made.'”[9] Bay began his directorial career in commercials and music videos, which is why these relationships were already in place.

It’s especially interesting to see how science fiction movies handle placement. I thought it was amusing how I, Robot made Will Smith’s character a collector of ‘classic’ footwear so they could incorporate Converse, compared with Nike’s self-lacing sneakers created for Back to the Future II. There have been some great concept car designs in these films too, including the Audi from I, Robot, and the Lexus in Minority Report.