David from Ironic Sans has an interesting idea for a film:

Idea: The uncanny valley as a plot element

I’ve been thinking the past few days about the uncanny valley in animation. I think it could be used as a plot element in a movie. Through some bit of sci-fi magic, an all-CGI character exists in our real world, but nobody accepts him because there’s something just not right about him. He exists in the uncanny valley and so everyone has a bit of revulsion or discomfort about him.

But that’s as far as I’ve gotten. I’m not sure what kind of story would best make use of this idea. How does a CGI character live in our world? Is it a ToonTown kind of thing, where animated characters have always lived among us, and he’s the first CGI character to be born? Or is it magic? I don’t like the idea of magic in a story like this. I think it should either be sci-fi somehow, or just left unexplained.

via Idea: The uncanny valley as a plot element – ironicsans.com

I left a comment with my own suggestion for how it could be done:

I love it. They would have to live in California, outside LA, in an area dubbed the Uncanny Valley.

Or maybe it’s a future where pretty much everyone wears contacts that allow them to see augmented reality – 3D creations blended seamlessly into our surroundings. Mostly this is used to display flashy ads, and stuff. However, Uncanny Bob is one of the first computer generated creations to become sentient. He meets up with a group of renegade CG characters (misfits from old ad campaigns: a Coke Santa Claus, a swimsuit model, some kids cartoon characters etc) and together they find a sympathetic human hacker who agrees to break into Big Ad Company and rescue their consciousness from the local sever onto the internet at large so they won’t ever be deleted.

Could make a great short film!

If you’re not sure what the uncanny valley is, I’ve pinched this from Wikipedia: 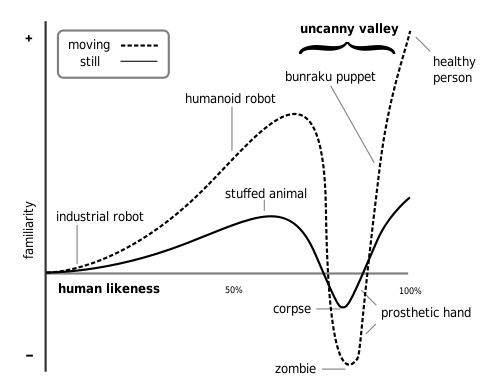 The uncanny valley is a hypothesis regarding the field of robotics.[2] The theory holds that when robots and other facsimiles of humans look and act almost like actual humans, it causes a response of revulsion among human observers. The “valley” in question is a dip in a proposed graph of the positivity of human reaction as a function of a robot’s lifelikeness.