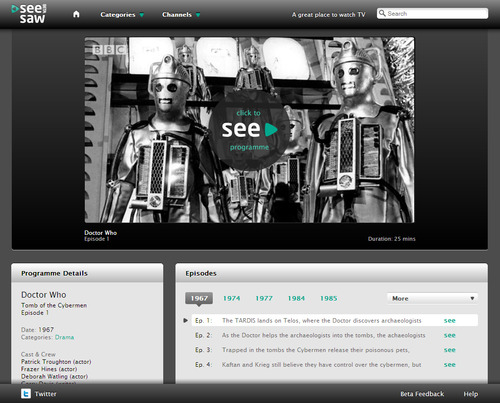 I just got my first look at SeeSaw, a new online TV service (using the defunct Project Kangaroo's assets). It's iPlayer basically, with a selection of UK shows, including many non-BBC. They seem to have a good selection, including some classic Doctor Who, which should keep me entertained for a while!

It's in beta, and I immediately had an issue with videos refusing to play, but this was fixed by making an exception to my AdBlock rules. (Well, foof actually, but it was causing the same problem). Speaking of advertisements, that is exactly how SeeSaw are making money out of this. 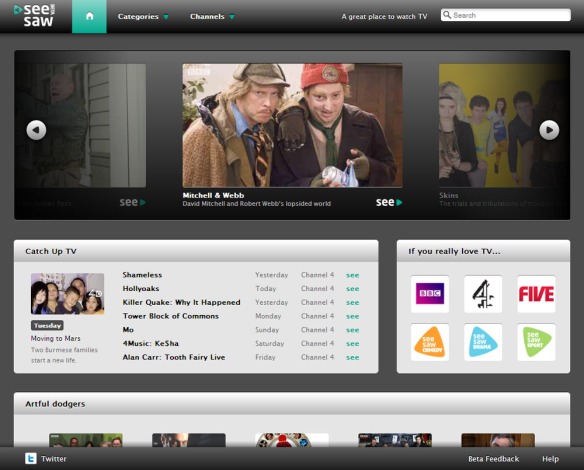 Channel 4’s former chief executive, Michael Jackson, was announced as the firm’s new chairman designate. However reports suggest he walked away from the post in September shortly after Channel 4 pulled its content.

Channel Five removed its shows around a fortnight later.

“Having completed the sale of SeeSaw in July, Arqiva is very disappointed by the failure of the new investors to provide their committed funding,” the company told the BBC.

“Without that funding the service had to close.”

Criterion Capital Partners could not be reached for comment.

“In the end they didn’t have the backing they needed to make it – the kind of content that drives significant levels of usage,” said Ian Maude, head of internet at Enders Analysis.

“They were in a very competitive market. ITV wouldn’t supply them content, and Channel 4 only did for a while. With competition from Google’s YouTube they just didn’t have a chance.”