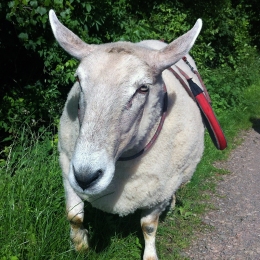 Today I was surprised and amused to see a pet sheep being taken for a walk along the Taff in north Cardiff.

Nick is perfectly happy to be petted (though he’s a bit smelly) and seemed to be completely unfazed by dogs. He is 22 stone though, so it’s probably the dogs that need to be worried.

@wmjohn on Twitter sent me a link to a story published in yourCardiff in 2010:

He said: “My partner and I had been to Goldcliff Nature Reserve in Newport, Easter Monday three years ago when we heard bleating from some long grass. When we took a closer look, we realised that it was a newborn lamb. He still had his umbilical cord attached. His mother had obviously bolted for some reason and left him. We took him to the nearest farm but the farmer was out so we left our name and number and he came home with us.

Only in Wales, etc.

Previously this article had named the sheep ‘Nicky’, based on the Wales Online article I used as a source (itself obviously uncorrected since it was posted in 2010!).