Last week there was a blog post by LukeW proposing a sliding alternative to CAPTCHAs:

[…] the sign up form on They Make Apps uses a slider that asks people to: “show us your human side; slide the cursor to the end of the line to create your account.” Moving the slider to the right completely submits the form and triggers error validation just like a standard Submit button would.

But why stop there? I just spotted this super geeky variation on the same idea on the Adafruit Industries blog: 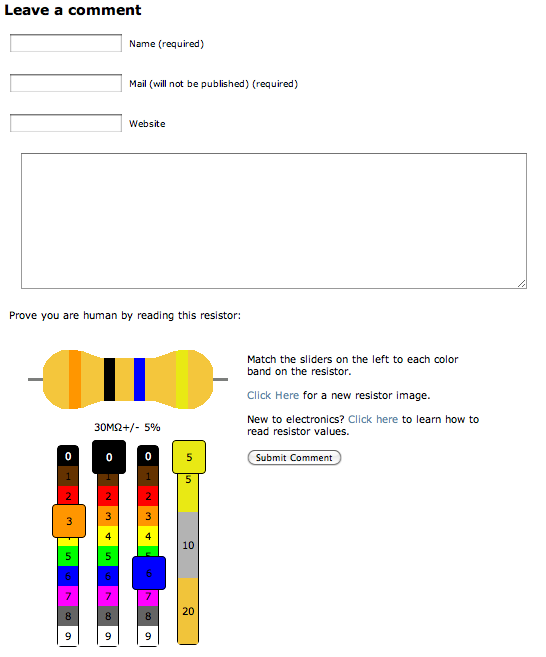 It seems that it’s their own creation, and is offered as a WordPress plugin:

We are thrilled to release a solve-the-resistor CAPTCHA plugin for WordPress! This plugin will draw a random 5% or 10% resistor and four color band sliders beneath it. The commenter needs to match the colors on the sliders to the colors on the resistor. Commenters don’t actually need to know how to read resistors, but this will help them as they post comments on site that use this plugin.

Of course, as with the slider alternative the resistor reading could still be easily worked around using crowd-sourced labour, but it’s still a fun idea!

2 thoughts on “Another variation on the slider CAPTCHA”