So, this is what I did with my weekend…

Proof that Zack Hemsey’s amazing ‘Mind Heist’ theme – aka the Inception trailer music – can make any movie look epic, even the worst movie of all time.

I put this together mainly as an exercise to help teach myself Final Cut Pro X. I have a little experience with Premiere and Avid, but I’ve really wanted to tackle a proper editing project with FCPX.

Beyond that, I just wanted to put together something entertaining and dramatic, while staying true to the character of Plan 9. 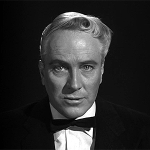 Lots of wonderful moments got left out of this trailer in favour of shots that simply worked better. I particularly wanted to include some of Criswell’s opening narration, especially the line “future events such as these will affect you in the future.” I felt as though I should have included more shots of Bela Lugosi too, but the nature of his scenes (they were shot for another film and used in Plan 9 after the actor’s death) meant that they were hard to find a place for.

I also did a little work in Motion 5, though not anything too complex. I wanted to find typefaces as close to those used in the opening titles of the film as possible, but had to settle for Bebas Neue and Pacifico – both excellent free fonts, but they do feel a little too modern.

For comparison, this is a still from the actual opening titles:

I’m sure there must be closer matches out there, but I was eager to get on with the actual editing. However, I liked the original typeface so much I used a cleaned-up grab of the main title for the end my trailer.

If this project taught me anything, it’s that I need to learn more about sound. The audio levels could use some work, and I’ve no idea how to clean-up unwanted background noise and make voices come through clearer.

The dreadfulness of the source material kept me amused during this edit. A particular favourite moment I wanted to dwell on was Tor Johnson’s shaky rising from the grave. It reminded me of the classic Inception Cat video, which if for some inexplicable reason you haven’t seen yet – do so now!

In fact, I loved pretty much any shot of Johnson and Vampira staggering around. They make quite the undead duo.

Movie fans may have noticed a not-very-subtle use of the Wilhelm scream towards the end. Although the scream does predate Plan 9, it wasn’t used in the film. I included it here purely for my own amusement.